Our immigration laws provide several pathways for non-citizens to enter the United States. Some people come with the intent to stay for a short time with a specific purpose, such as students, doctors, or researchers. Others carry the hopes of becoming U.S. citizens and seeking permanent residency.

Sometimes, though, goals and plans change for non-U.S. citizens already in the country, and people decide to convert their temporary status to permanent residency. This is done through a process described under the law as “adjustment of status.”

How do you adjust your immigration status? What exactly is involved in doing so? The immigration attorneys at De Castroverde Law Group, with years of experience representing hopeful prospective citizens, have the answers for you and can help you decide on a strategy that’s right for your family.

What Does Adjusting an Immigration Status Mean? 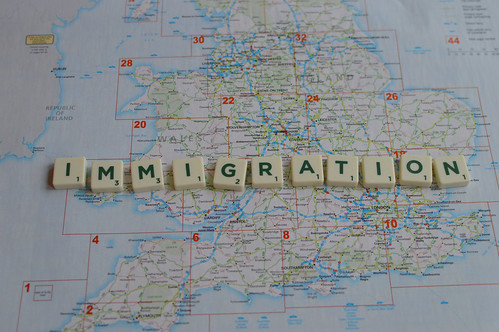 Immigration by Jeff Djevdet is licensed with CC BY 2.0

According to the office of U.S. Citizenship and Immigration Services, adjustment of status describes a legal process you follow to apply for a Green Card when you are already legally in the United States on a visa. A Green Card confers the right to live and work in the United States and grants status as a permanent resident, though you are not yet a citizen.

There are other paths to obtaining a Green Card — family relationships, for instance. Adjustment of status is only for people already in the United States. If you are outside the United States, you can only pursue permanent residency following procedures at the U.S. consulate in your home country.

Why Would You Want an Adjustment of Status?

Quite simply, you pursue an adjustment status if you have a long-term goal of emigrating to the United States and becoming a citizen. Commencing an adjustment of status application will allow you to stay in this country until the application is decided, even if your visa has expired or will expire.

How Do You Adjust Your Status?

Adjustment of status is a detailed, multi-pronged process that requires both diligence and patience. It can be completed in as little as six months but can also take as long as three years. The timeline depends on the circumstances of your eligibility. If, for instance, you are seeking adjustment of status through marriage and your spouse is already a citizen, the process tends to move faster. If your spouse is a Green Card holder, then it may take longer.

The first step in an adjustment of status process is simply determining if you are eligible under the law to seek a Green Card. You may be able to do so if a family member is already a citizen, with the sponsorship of an employer, as a refugee or victim of abuse or human trafficking, or various other categories. Some of these other categories are very specific to certain situations in countries such as Cuba or Liberia.

Initially, the process requires you to complete some detailed paperwork such as filing an immigration petition, a Green Card application, and USCIS form I-485. This form comes with a supplement you must complete to request consideration for adjustment of status.

Once the forms are received and believed to be correct, the government will begin the process, which requires several actions on your part. You will have to visit an Application Support Center to provide fingerprints, a photograph, and a signature. These are considered “biometrics” and are used to confirm your identity and carry out other aspects of a background check.

If everything is in order, then the government may schedule an in-person interview. You will have to bring original documents with you and answer questions about your background and your reasons for requesting an adjustment of status. In the days that follow, the government may send requests for additional evidence.

From there, it’s time to wait. At some point in the future, USCIS will send you a letter telling you either you have been approved for adjustment of status or a letter explaining why you were denied. Generally speaking, a denial of an adjustment of status is not subject to appeal, but you can move to reconsider the decision.

It’s important to realize that not everyone who is approved receives their Green Card right away. Some wait years until a Green Card is available in their particular category.

If all of this sounds complicated, that’s why we’re here. The attorneys at De Castroverde Law Group have extensive experience in the adjustment of status decisions. We can help you with the process from start to finish to position you for the best possible success. Contact us today for a consultation.

How Do I Become a U.S. Citizen

Completing your adjustment of status process and receiving your Green Card is a tremendous accomplishment. However, you have a long road if you intend to obtain U.S. citizenship.

Generally speaking, you have to live in the United States for five years before you can seek citizenship, according to USCIS. You also have other obligations. For instance, you must pay your taxes for that entire period and avoid committing crimes.  You also have to be careful not to exit the United States for an extended period without the proper permission. Pay close attention to the eligibility requirements, or you may lose out on a chance to seek citizenship.

Adjustment of status is just one part of the larger U.S. immigration system, which consists of laws that can seem complicated and confusing. Hiring experienced immigration attorneys at De Castroverde Law, serving Las Vegas, Reno, and other parts of Nevada can take the pressure off. Our team can help whether you are seeking an immigrant visa for your spouse, trying to understand family-based immigration law, need work permits or employment authorization, or face deportation or some other challenge.  If you or someone you love needs an immigration attorney, the team of attorneys at De Castroverde can help. Give us a call today or contact us online for an initial consultation.